Robin Autorino is an award winning chocolatier and has been named by Dessert Professional as one of the Top Ten Chocolatiers in North America in 2013.

Becoming a chocolatier was a very unlikely outcome for Robin from the very beginning. As early as she can remember, she had been allergic to chocolate and was not able to enjoy it as a child or during most of her adult life.

Grown up and in search of adventure, Robin joined the Navy to see the world. Having been stationed in Spain, Guam, Australia and many other locales throughout her Naval career, she was able to call many amazing places home.

Living overseas far from family, however, can be difficult for a single mom; especially during the holidays. Robin found family amongst friends during her travels and often hosted holiday dinner parties for the other sailors and their families. To keep her young son from getting underfoot while she cooked and baked for gatherings, she had him dip pretzels in chocolate as gifts for the guests.

After fourteen years of service, Robin left the Navy and settled in Northern Virginia. Robin worked for a string of technology companies during the height of the Internet boom; but while it paid the bills, it certainly wasn’t a passion. 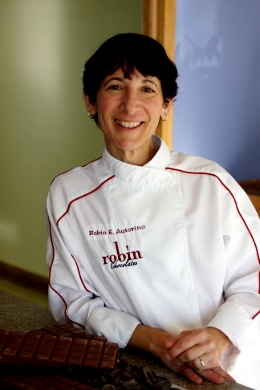 As time passed, her son grew up and on with his life. Robin became restless and embarked on a search for her next adventure. That search led to a move to Boulder, Colorado where she made the decision to transition from technology professional to professional chef.

Robin landed at a local culinary school where she studied classic French cooking techniques using locally produced, seasonally available ingredients. Her last month of culinary coursework was spent in Avignon, France where she had the honor of studying with master chefs from Michelin starred restaurants and working at a local pâtisserie. Robin's experience at the pâtisserie inspired her to become a pastry chef.

Robin was required to taste everything she made at the pâtisserie, including all of the items made with chocolate. Not about to make excuses about allergies to a French pastry chef, Robin tasted the chocolate and waited for the adverse reaction. By luck or fate, the expected reaction never came and Robin’s passion for chocolate began.

As it turns out, Robin is still allergic to some chocolate. The discovery was made upon returning from France when she purchased a mass market chocolate bar. After a single bite, she had an immediate reaction. To add insult to injury, the flavor did not agree with her either. The difference may simply have been in how the chocolate was made, either in the ingredients or the process.

Over the next several years Robin worked to develop her craft in the pastry kitchens of a number of landmark restaurants and hotels. Among these are Flagstaff House and Dushanbe Tea House in Boulder as well as The Brown Palace Hotel in Denver. During this time she also interned at Tru in Chicago.

In her spare time, Robin began to make molded chocolates for friends and family, experimenting with flavors and artistry. Just before Valentine's Day in 2008, a local florist needed chocolates and asked Robin to provide them. She jumped at the opportunity to transform from chocolate enthusiast to chocolate entrepreneur. And thus, Robin Chocolates was born.

On that first Valentine's Day Robin’s chocolates were pretty good. Since then Robin has continued to work towards perfecting her craft, studying with some of the top chocolatiers in North America and Europe. These days her chocolates not only win awards, they have a loyal and growing following.

There are many chocolates out in the market that are beautiful to look at but disappointing to taste. Robin combines artistry and flavor to create little masterpieces that taste as good as they look. Through her chocolates Robin has found a way to make people smile, which makes Robin very happy indeed.